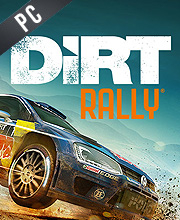 DiRT Rally keyOne of the most authentic and exciting rally video games ever made – that’s what you are bound to receive with DiRT Rally Steam key. Racing game developers and publishers Codemasters surpassed themselves with the DiRT Rally release in late 2015 by providing the gaming community with the rally simulator with no comparison. Enjoy the opportunity to sit behind the wheel of your favorite cars and tackle the unforgiving off-road terrain at gut-wrenching speeds!

DiRT Rally game physicsDuring the development of DiRT Rally, Codemasters shifted their focus and set out to provide one of the purest rally racing in all of gaming. Experience such as this was possible only through the in-house Ego engine built by Codemasters team right from scratch. Buy DiRT Rally Steam key and witness the realistic game physics in the middle of the action! Each car feels different and you’ll feel the shifting weight on every hump and turn!

DiRT Rally PC gameplayMake your way through forests, cross tracks, and many well-known rally courses around the world. You will race against real players or relentless AI with diverse weather conditions and uneven terrain adding to the challenge. The game might require practice but the learning curve is deeply rewarding and aggressive audio effects of popping exhausts or the squealing tires will have your adrenaline pumping in no time. Lastly, once you buy DiRT Rally Steam key and run the game, you’ll be blown away by simply breathtaking visuals that still hold despite the game’s age.

DiRT Rally game features:If you’re into racing, DiRT Rally is a piece you can’t miss out on but you should also know that it’s only one among many other racing titles developed by Codemasters. Checkout the Codemasters Software Games collection and see what else is in store!